For Giuseppe Penone the logic of analogy, disregarded by Western scientific thought, retains real value in interpreting the affinities between the animal, plant, and mineral kingdoms. In 1990s the artist intensifies his instinctive propensity to interweave different levels of reality and creates the series Anatomie (Anatomies).

"Our culture," he noted in a 1989 interview, "has divided ways of thinking, the human being from nature. I do not believe that this clear distinction can be made (…). From a cosmic viewpoint, the distinction between them is irrelevant". The logic of analogy allows the artist to establish comparisons between different forms and materials that appear to be linked by similarities.

Greater exhibition opportunities prompt him to reconsider his work as a whole and to identify links and analogies between the various works. For retrospective solo shows, Penone has always rejected chronological sorting and focused on consistent exhibition logic. Works conceived at very different times can be placed side by side to measure their affinities. For the artist, the validity of a work lies in its capability to generate others, through transmigration of images or techniques.

The grey veins drawn in the marble like graphite on paper, are partly coal, graphite.

The white of the marble envelops them, covers them, it is like a skin, a white bark.

A gray tree at the heart of the birch forest insinuates its branches among the white tangle that surrounds it.

The drawing of the marble, the paper of the birch trees, the mass of snow on the mountains.

The veins of the soil, the secret life that flows in the earth,
the veins of water, the roots of the grass, the veins of stone.

The bifurcations of hands, trees, rivers. 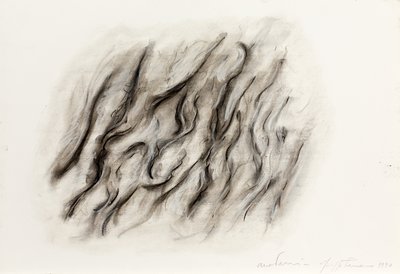 Many of the new works from this period require a demanding manual labor. In this regard the title L’espace de la main (The Space of the Hand), which the artist chooses for the 1991 Strasbourg show, is significant. After working with basalt for Nero assoluto d’Africa (Absolute Black of Africa, 1978-79) and stones in the series Essere fiume (To Be a River, 1981), now Penone chooses white, lightly veined Carrara marble, traditionally associated with the human figure to explore analogies between living body and the mineral.

He creates five new works titled Raccogliere gli sguardi (Collecting the Gazes, 1992). For him the surface that is visually closest to marble is that of the eye. Thus he carves into the upper surface of the masses, making a negative and enlarged form of an eyeball and its optic nerve, sinking the latter down into the material. While sculpting, he observes a vein in the marble that is more consistent than the others, so he decides to emphasize it. Once the surface of the marble has been partially worked, he carves the vein and follows it in its irregular paths. The result is a high relief that reveals a fluid aspect within the material, with canals similar to those through which the blood of animals and the sap of plants flow. The process is not aimed at revealing an original or previous phase of the material, as in the Anatomies series the focus is on affinities, both linguistic and visual.

Compared with other techniques of Penone’s works — based on the cast, on the detection of the imprint, and on the repetition — this new way of working introduces an arbitrary and liberating factor in the creative process, that for the artist is similar to drawing and to what happens in the ideational phase of a project. 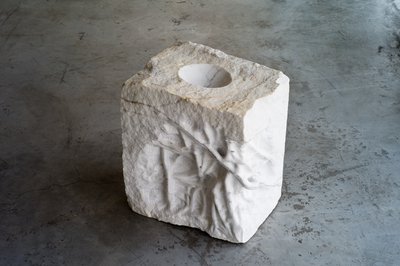 Anatomia 1 (Anatomy 1, 1993) is a hewed parallelepiped, placed directly on the ground. Penone worked only two of its vertical faces, carving only in some points the complete relief. In another Anatomia of the same year on the upper surface of the mass, the point where the material "looks like a skin, the skin of marble", Penone inserted a plaster cast of a hand. 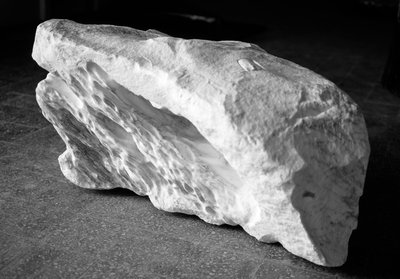 In Anatomia 3 (Anatomy 3, 1993) cavities and tunnels cross the material, along which, thanks to a small engine, water flows and then collects in a basin dug in the lower part of the sculpture. The original state of fluidity of the material, suggested by the carved veins, became evident with the use of water, which in nature is the main responsible for the erosion of the stone.

In Anatomia 5 (Anatomy 5, 1994) the entire surface is worked, but an artificial element disrupts the mimesis: a flat, polished surface is visible on the two opposite faces of the sculpture. 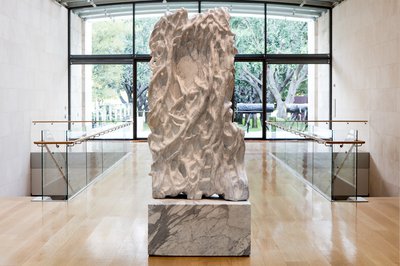 From 2000, Penone reveals the veins existing in a series of Carrara marble slabs, titled Pelle di marmo (Skin of Marble). One of them consists of fifteen slabs cut from a single block of stone, where the slab from the core of the block is carved on both sides, while the others, with only one face worked, rest against the wall. The connection of the material with the mountain from which it is taken is made explicit in a similar group of sculptures, Pelle del Monte (Skin of the Mountain, 2012): marble slabs hanging on the wall, on which the partially sculpted surface remains exposed, and a split on the top allows a glimpse of a raw material with impurities of vivid color. 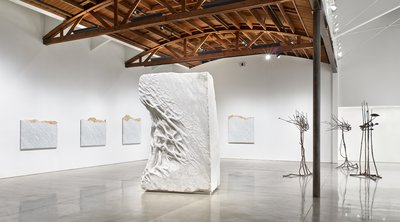 A skin of white marble, a surface covered by small signs of tools that investigate, scour, dig and underscore its veins, revealing the pulsating fabric of the mountain.

The interior coats the exterior, the material that is inside the body, used to envelop it.

Flesh, bones, veins of the hand coat the glove.

The marble coats the hand, the skin and the veins, it envelops it and covers it with white dust.

It is sculpture of marble, skin of marble.

A block of marble cut by a blade of steel covered with precious stone.

A necklace that sinks into the flesh, into the lard of the mountain.

The blood of the marble made of water and white dust that streams from the blade and soils our shoes.

A blade beaded with diamond studded cylinders that seem like pieces of the starry night.

The dazzling material of the marble is extracted from the darkness, from the mountain’s interior.

In Pelle del vento (Skin of the Wind, 2005), designed to be seen outdoors at the second Triennale d’art contemporain sur mer in Beaufort (Belgium), in 2006, the signs that emerge from the material describe an enlarged portion of the artist’s skin. This arrangement is similar to those that Penone draws in Pelle di grafite (Skin of Graphite, 2002), first exhibited in a solo show in 2006 at the Galerie Alice Pauli in Lausanne and then, that same year, in Sulla punta della matita si specchia la pelle dell’universo (The Skin of the Universe Is Reflected on the Tip of the Pencil), at the Galleria Tucci Russo in Torre Pellice (Italy).

For the Italian Pavilion at the Venice Biennale in 2007, Penone placed large slabs of Carrara marble on the ground, worked in bas-relief, where the veins emerging on the surface reveal the enlarged image of a brain. The viewer is free to observe them, but also to step on them, perceiving their shape through the contact of his feet. The association recalls other previous works such as Paesaggio del cervello (Landscape of Brain, 1991) or La natura delle foglie (The Nature of the Leaves, 1990) and Foglie (Leaves, 1990), which are the result of the superimposition of two different impressions, one taken from a skull and the other from a leaf: as the artist explains, the reference is to the process of "excavation of ideas which, once extracted, are brought to the surface, and the more the brain is rich in layers, in memories, the more galleries there are, the more stops, the more facades of excavation". 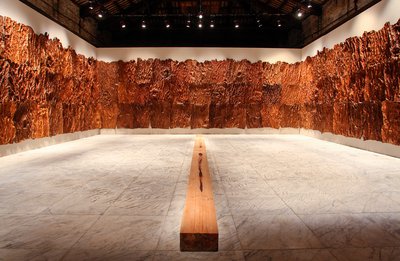 In many later works, Penone incorporates plants, animals, and minerals, following the logic of morphological analogies. In the series titled Pelle di marmo e spine d’acacia (Skin of Marble and Acacia Thorns), one or more canvases on which he has glued some acacia thorns are juxtaposed to the marble, delineating continuous patterns through the two surfaces. Other works are enlarged impression of the human body: the wrinkles of the skin of one hand; or the lips, as in a twelve-meter-long version titled Spoglia d’oro su spine d’acacia (Golden Skin on Acacia Thorns), created at Tor Bella Monaca in Rome in 2001-2002; or an eye or the forehead, as in Spine d’acacia - Giano (Acacia Thorns - Janus, 2015), exhibited in 2016 at the Rijksmuseum in Amsterdam. 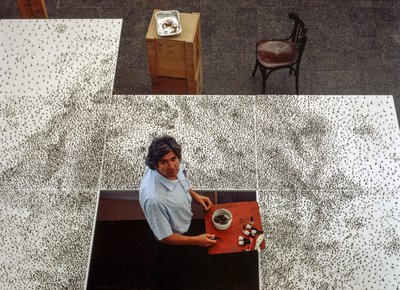 For Penone, "Although in indirect fashion, the thorns pose the problem of the envelope that shrouds us: they cause nonlethal but annoying wounds; they are similar to the innumerable small nerve endings of the skin". 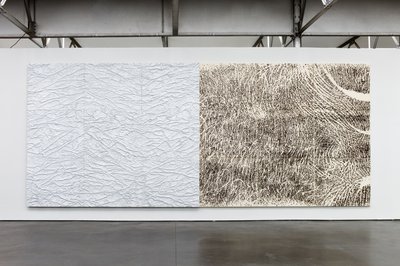