Less interested in confronting so-called unspoilt nature or creating works that most people would only see through photographic reproductions, Giuseppe Penone has installed many works in public and private gardens and has so far produced two complete garden projects.

The garden, after all, a place par excellence where nature and artifice interpenetrate and where certain distinctions, such as that between outside and inside, blur, is the ideal context for Penone's art. In the garden environment, the interactions between artifacts and natural elements are amplified and become deeper. The time factor has a greater impact, because the biological element - plants that develop according to uncontrollable factors, such as soil fertility or climatic events - gives the work an additional degree of uncertainty and variability.

A garden, a closed space,
a space that excludes and includes,
the territory of an awareness and a consciousness,
the space of a cloister or a piece of cultivated land,
a place for flowers, for vegetables, for fragrances and tastes,
a place of wonders, of work. 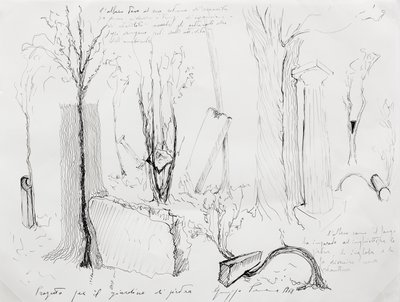 Progetto per il giardino di pietra (Project for the Garden of Stone), 1968

An inclination to think of the garden as the ideal place to experience vital dynamics among the elements is demonstrated from drawings made at the time of Maritime Alps already - such as Progetto per il giardino di pietra (Project for the Stone Garden, 1968). Great care is devoted by the artist to his property in San Raffaele Cimena, Italy, a small town sheltered on a hillside completely surrounded by woods, a place of experimentation for his work and a rich source of materials, in short, an atelier, since the 80’s.

A decisive step in the development of his interest in the garden is the work Biforcazione also known as Pozzo di Münster (Bifurcation/Münster Pit, 1987), a permanent installation in which a bronze trunk stretches out horizontally on a meadow and, also thanks to the patina of the metal the recalls the colour of wood, mimics the other plants in the park. Another important work in this progression is Faggio di Otterlo (Otterlo Beech, 1987-1988), in the sculpture park of the Kröller-Müller Museum in Otterlo, Netherlands, where Penone fills the space of a missing beech tree along an avenue leading into the forest with a site-specific bronze tree.

With Albero delle vocali (Vowel Tree), created between 1999 and 2000 for the Jardin des Tuileries in Paris, Penone compares the amorphous logic of the plant with the geometric logic of the garden’s design, drawing on advice from the landscape architect Pascal Cribier. Installing a large fallen bronze oak tree in a square of the garden, and planting a tree at the end of each of the branches, Penone emphasizes the manner in which the tree grows, with its structure progressively splaying out in response to the need to acquire more light. 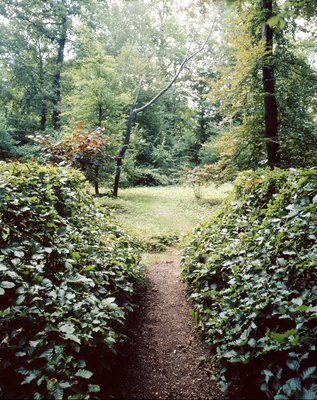 In 1997 at Castle Wijlre in Maastricht, Netherlands, home of a cultural institution for contemporary art, Penone creates a "garden-tree" called Van Eijck Garden. The passion of the clients Marlies and Jo Eijck for topiary (the ornamental pruning of plants) suggests to the artist a path delimited by two parallel hedges that denote, in plan, a branch with bifurcations. Walking between the hedges, pruned in such a way as to delimit a hemispherical space, visitors ideally follow the path of the sap inside a trunk. The three branches correspond to different routes: one ends in a pond, the central one in an oak tree and the other in a sculpture carved out of a young tree.

In 2002 Penone intervened in the garden of the Neanderthal Museum in Mettmann, Germany, where the first fossils of the hominid living two hundred thousand to forty thousand years ago were discovered. Here he realizes Neanderthal Hecke (Neanderthal Hedge), a hornbeam hedge, about forty metres long, which must be pruned regularly in order to obtain the negative form of a human figure at the top, whose body thus appears immersed and disappears into the forest. 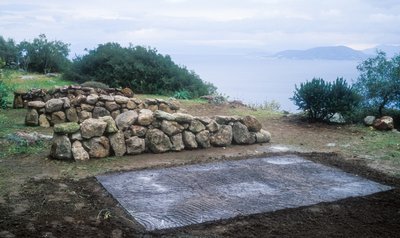 In 2005-2006, Penone designed Tre muri e pelle del mare (Three Walls and Skin of the Sea) for an embankment overlooking the sea in the park of a private villa in a Greek island. It is made of three parallel dry-stone walls: the first made with ninety stones found on the site, the second and third with castings from those stones, respectively in bronze and steel. The work is completed by a terracotta floor that bears the enlarged imprint of the palm of a hand, with wrinkles similar to the wavy surface of the sea in front. 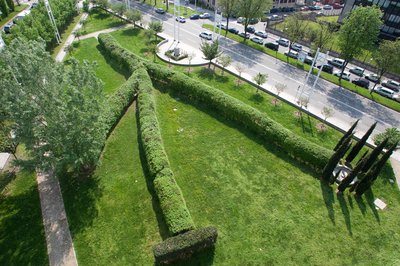 Albero-giardino (Garden-Tree) is the first actual garden designed entirely by the artist. Built between 2000 and 2002, it is part of a complex urban intervention commissioned by the City of Turin, for which the curators Rudi Fuchs and Maria Cristina Mundici install a series of sculptures along a path designed by the architect Vittorio Gregotti. They entrust Penone with a triangular green area of about four thousand square metres. The artist traces three paths that draw a tree. All the paths are covered with hornbeam hedges, which envelops them like bark. The trunk runs along the longest side and has two forks. The main path leads to a circular pool surrounded by cypress trees that channel light in the direction of a reflecting pond. A path ends against a laurel wall. The other has hedges surrounding a poplar tree, in an ideal vertical continuation of the tree. The structure as a whole highlights the fluidity that bonds by analogy the plant, the watercourse and the path of man, a reasoning that finds full accomplishment in the other garden created by Penone.

There is a moment when the trees and colors of the forest are at the center of human culture.

Through observation of the forest you intuit the rules for the calculation and comprehension of life’s path, by measuring the rhythm of the tempos of things.

It is the moment that has seen the gods of the heavens enclosed within the trees.

Are the names of the divinities contained in the wood of the trees?

An alphabet of trees?

A writing with letters of the forest?

It is seductive to think that the sound of a word, of a name is transcribed with letters of the forest.

The wise man has knowledge in his hand, has it at his fingertips which transmit signs of writing, whether gripping a stylus or tapping on a keyboard.

The fingers of the hand extend into the trees that cadence the cycle of the year, that count time, that are the letters of an original writing.

Every word of trees collects days of rain, sun, mist, contains seasons, memories of places, of times experienced, has a different meaning from person to person.

They are words that fill the woods with their presence, invade the landscape, force us to an interpretation of motion, active, and push us for their correct interpretation in the forest’s care.

The Giardino delle sculture fluide (Garden of Fluid Sculptures) created in the park of the Reggia di Venaria, near Turin, is the most complete work among the gardens designed by Penone. The artist was involved by Ida Giannelli, at that time director of the Museo d'Arte Contemporanea di Rivoli, in the restoration project (started in 1999) of the grandiose complex built and enlarged between the 17th and 18th centuries, but which had long been in a state of neglect. One portion of the park was restored to its original design; for another portion a decision is made to "entrust the poetics of a contemporary artist" with the task of "absorbing and expressing an entire portion of that landscape".

Penone designs every detail of the new garden, set up between 2003 and 2007 on the lower side of the park, known as Parco Basso. Not only he conceives the general layout, but he also creates a series of site-specific works, and chooses the trees to be planted in collaboration with the landscape architect Paolo Pejrone, in search of a sense of completeness and coherence between his intervention and the pre-existing landscape. 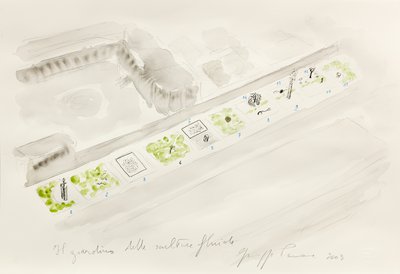 The large rectangular space of the garden is divided into a sequence of eight large parterres that recall the original formal garden, where each square is compared to the "pages of the earth", allowing the viewer the ideal "reading" of the works the artist places, through an adequate sense of proportion. Three hedges interrupt the view of the whole, so that the spectator can pause and concentrate. Each sector is different from the other, containing one or more works, and is characterised by its vegetation, with characteristic colours and essences. The passages are delimited by light-coloured gravel. 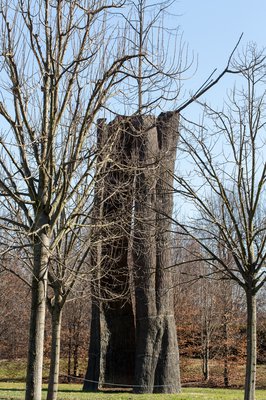 The path begins with a meadow where a large bronze tree called Tra scorza e scorza (Between the Barks) stands, inside which a linden tree is planted. In the next square there is a grove of lime trees, whose leaves, dark green in the upper part, point towards the sun when the weather is hot, while the lower part is light green, almost white. By contrast, the ground is covered with black gravel. Passing under the thick shade of these trees, visitors step on bronze roots camouflaged among the plants (La luce dei passi/The Light of the Steps): their steps keep the metal surface shiny and bright. 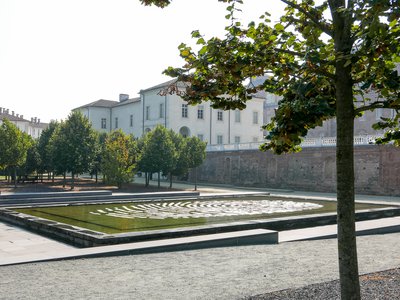 Immediately beyond there is the large basin framed on three sides by a stepped stone structure, Disegno d'acqua (Water Drawing), with the imprint that rhythmically emerges thanks to a water play. After another grove of lime trees on dark gravel, called Il colore dei temporali (The Colors of the Storms), the white surface of Pelle di marmo (Skin of Marble) unfolds: 415 square metres of Carrara marble slabs, carved along the veins. Further on, the sculpture Anatomia (Anatomy). 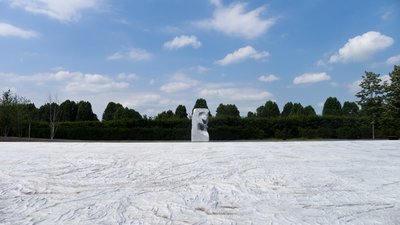 The next grove, called Chiaroscuro, hosts Himalayan birches with a thin, white bark that peels away from a dark trunk, beyond which, on the green lawn, takes shape Cervello di pietra (Brain of Stones) composed of large, polished river stones arranged to form a brain, with a drooping beech inserted between the two lobes. The stones are granite, and the artist associates their crystals (with their being acute, linear, crystalline, etc.) with thoughts. 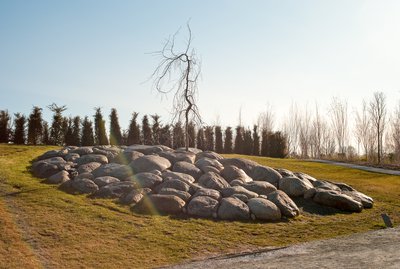 Other representative works by the artist mark the path in the Parco Basso: a Bifurcation, Ideas of Stone, a Vegetal Gesture immersed in a hawthorn hedge, and Ossa della terra – frassino (Bone of the Earth – Ash Tree) consisting of a bronze tree with a branch bent to the ground by the weight of a large stone. Nearby Direzione verso la luce (Direction toward the Light) stands out: a high bronze tree trunk, the branchless top of which emits a water vapor, transmitted from the power station of the building, and which here becomes the leaves and foliage of the plant. 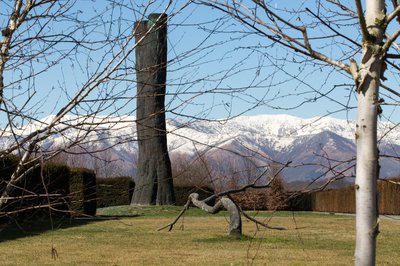 On the path through the Garden of Fluid Sculptures, the mineral and vegetable elements change in mutual contact: the water in the pool and its imprint evolve like a breath; the leaves become clouds; light and shadow and all the contrasts are dispersed throughout the garden as generative actions guaranteed by the condition of fluidity that governs nature. 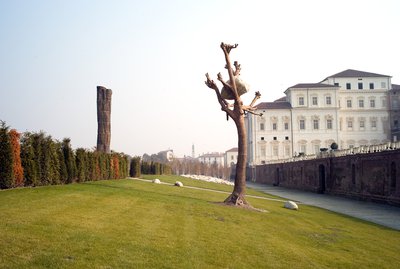