In Idee di pietra (Ideas of Stone) and other works realized in the 2000’s, natural, psychic and cultural phenomena are connected in an identical landscape dominated by the morphology of the bifurcation. Ideas of Stone are bronze trees that host river stones in those bifurcations.

Penone begins to make Trees in bronze, without foliage, during late 1980’s: they are fused from the matrix of real trees and show the structure that develops through ramifications from the trunk to the branches. Bronze and its patina, after oxidation, resemble the color of a trunk.

The first of these works is a sculpture originally entitled Biforcazione (Bifurcation), made for the Skulptur Projekte of 1987, also known as the Münster Pit. The cast of a large ash tree branch rests on the ground, planted at the base, it forks and extends into smaller branches. At the first bifurcation there is an imprint of the artist’s hand and forearm. Water flows along the arm and palm, drips from the fingertips and then falls to the ground, where it is collected and then put back into circulation, to mean that the tree, the river, the hand has the same "structural logic".

In 1987-1988, Penone realized the Faggio di Otterlo (Otterlo Beech) for the outdoor sculpture garden of the Kröller-Müller Museum in Otterlo, Holland, a bronze tree, in this case with leaves. The leaves, close to a bifurcation of the tree, reveal a positive fusion of a human body. At the foot of the tree the same form is repeated in negative, imprinted in a bronze cast of roots and foliage. 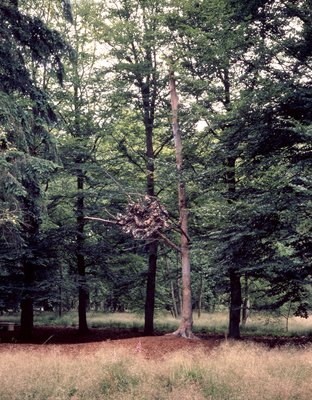 Albero delle vocali (Vowel Tree, 2000), settled in the Jardin des Tuileries in Paris, is the bronze of a large oak tree lying on the ground. In its natural environment, the original tree developed particularly long branches to conquer space and light. In the Tuileries garden the growth of the plants is regulated by human design and by contrast Penone emphasizes the way the trees grow in the forest. Where five of the branches of the oak, forking in different directions, touch the ground, five different trees are planted: a yew tree, a poplar, an ash tree, an alder and an oak, each of them are sacred essences to gods in Greek and Celtic pantheons. At the opposite end of the trunk, five bunches of flowers with tangled roots curve, each one delineating a different vowel, thus associating the language of men with that of plants. The observation of a natural behavior is associated with the myth that reveals a potential spirituality.

The invention and conception of bronze casting embodies a deep knowledge and reflection on the growth of vegetation.

The tree, with its fluid form, exemplifies the falling towards the light of matter, and the branches, with their extension, nourish the foliage that is equivalent to the surface of sculpture in bronze.

The matrix that enfolds the tree is the air.

The bronze testifies to the profound tie that exists between its cast and the growth of vegetation.

The weight of a tree in bronze that rises above the ground sustained by the growth of the trees that surround it is sculpture. 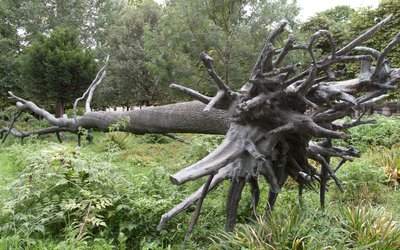 Elevazione (Elevation, 2000-2001) is a large, century-old chestnut tree, which was knocked down because it was attacked by parasites. Penone fuses trunk and roots in bronze. The roots are branched in five directions, with a steel support post inserted in each direction. Next to the five poles are planted as many saplings, thus arranged around the bronze tree. As time goes by, the growing trees will include the steel poles, "forming with the columns of their trunks and the rotation of their leafy branches, a domed space within which the chestnut tree will rise, suspended". Its elevation will suggest an unusual process of sanctification of the tree. 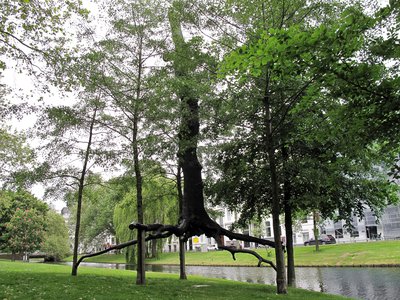 Following a violent storm in 1999 that felled several monumental trees in the park of the Palace of Versailles, Penone acquired two centuries-old cedars from the French State. From one of them, with a diameter of two meters, he made Tra scorza e scorza (Between the Barks, 2003). Its bark reminds the artist of the skin of an enormous animal. Two bronze surfaces, similar to shells, are cast from it, corresponding to the size of the tree during its last year of life. A young tree is planted in the ground between them. Entering the space delimited by the barks is like being enclosed within the tree, in a "magic circle", as the artist describes it, "within which one hundred years are found". 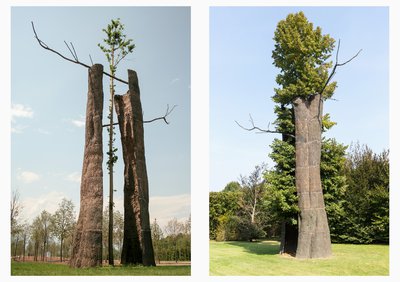 What is an idea that appears suddenly or after long reflection in space without the mind’s force of gravity?

An idea that is formed summing up innumerable previous thoughts, polished by the passage of time, compacted by the weight of memories, cracked by doubts and by the uncertainties that insinuate themselves between the thoughts separating them?

It is a river stone that appears amid the branches of a tree.

These trees cast in bronze are the origin of Idee di pietra, works in which new elements are grafted onto their natural prototypes. In 2003 Penone makes drawings in which the five fingers of one hand are associated with the branches of a tree, capturing them in the act of holding a dark mass at the various points of bifurcation between fingers/branches. In the same year the first work titled Idee di pietra (2003) is made: one example is now in Karlsaue Park in Kassel, Germany, where it is installed in 2012 on the occasion of documenta 13, curated by Carolyn Christov-Bakargiev. 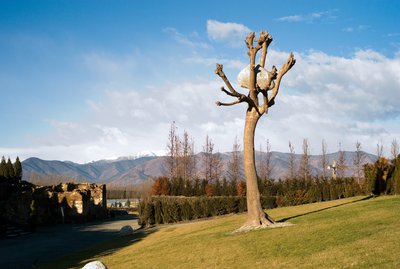 The series develops the relation between river stones and thoughts. Stones are shaped by the river, while thought is shaped by experiences, doubts, and reflections. Thoughts, moreover, find fulfillment when they are removed from their flow, like stones caught by branches, or like stripped branches and stones that find rest in the bends of the river. In these sculptures river stones are the light that growing branches seek, but they are also the weight with which leafy branches and accidents counteract tree growth. Stories of individual trees are fossilized in bronze, every sculpture allows a revelation of existences of organisms. 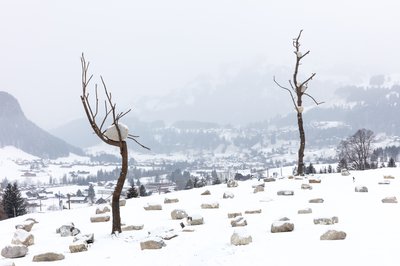 Idee di pietra – ciliegio (Ideas of Stone – Cherry Tree, 2011) is made from a plant near the house of San Raffaele Cimena, on fertile soil that makes it develop shallow roots. Every year the artist observes its flowering, but also the progressive inclination of the tree, caused by the fragile root system.

The elm used for the casting of Idee di pietra – olmo (Ideas of Stone – Elm Tree, 2008) instead grows on abandoned farmland, and brambles and vines restrain a section of the trunk, pulling it downward. A large stone is placed in the bend delineated by this trunk as it resumes its upward path. 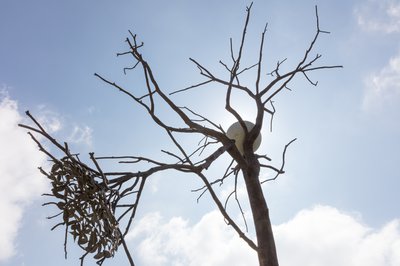 In bilico (On the Brink, 2012) is a maple tree with long branches extending into space in order to balance a weight, which, in the sculpture, is a large river stone.

In Le foglie delle radici (The Leaves of Roots, 2012), a large walnut tree uprooted by a storm, stands overturned. The roots, cast in bronze and pointed skyward, create a repository in which a shrub now grows.

La logica del vegetale (Vegetal Logic, 2012) shows faith in regeneration, seen in the botanical sign of the cutting as well as in mythological terms. A large chestnut tree is cut down, and a young holm oak grows out of each of the five branches emerging from its trunk.

In 2011, on the occasion of the 150th anniversary of the Unification of Italy, the De Fornaris Foundation commissioned In limine, to be installed at the entrance of the Galleria d'Arte Moderna e Contemporanea in Turin. It is an arch formed by a centenary tree trunk with bronze roots emerging from a large marble sculpture from the Anatomies series. At the opposite end of the arch extend the tips of the branches, which end in a lime tree foliage. 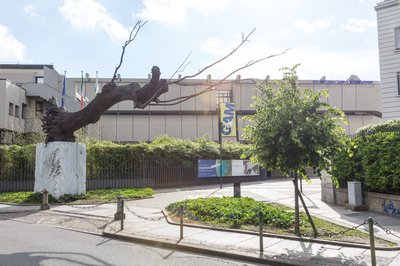 In Vene di pietra (Stone Veins, 2015) as well, a bronze tree is associated with a large stone, a granite mass held in suspension by the forked branches.

Triplice (Triplex, 2011) is a nettle tree, a plant commonly known as a "stone breaker" because of the way its roots creep between the stones and, with slow, continuous pressure, break them. In nature this tree develops three trunks, two of which are held by the weight of an uprooted acacia. In the completed sculpture a stone is placed on a tree trunk resting on the ground to represent the weight of the acacia. Another stone, placed between the branches of a trunk grown upwards, underlines the vitality of the tree's existence.

Albero folgorato (Thunderstruck Tree, 2012) is based on a hundred-year-old willow that grew in Grand-Hornu, in Belgium, a museum of contemporary art placed in a former colliery. The director Laurent Busine shows Penone a willow struck by lightning with shocking force and violence. After casting the tree in bronze, the artist protects its pulp and wounds with gold. The golden gash also connected "the invisible power of the electric branch-like networks present in the sky (…) to the invisible structure of the forces in the ground". 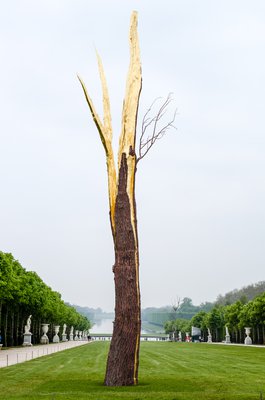 Sculptures of the series Idee di pietra are mostly installed outdoors, and many of them are intended for settled in parks, or have been protagonists of important solo show, such as Penone Versailles, curated by Alfred Pacquement, in the Versailles gardens (2013); Ideas of Stone in Madison Square Park, New York (2013–2014); Prospettiva vegetale in the Giardino di Boboli, Florence, Italy (2014); Penone in de Tuinen, in the garden of the Rijksmuseum, Amsterdam (2016), Giuseppe Penone. A Tree in the Wood at the Yorkshire Sculpture Center in Wakefield in 2018; and Giuseppe Penone in San Francisco in 2019. 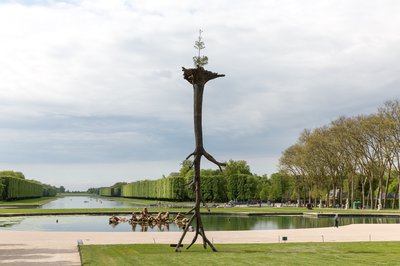