In the wintertime 1967-1968, at the beginning of his career, Giuseppe Penone performs a series of actions outdoors in the forested landscape of the Piedmont region, around his birthplace, Garessio. These actions, photographed and collected under the title of Alpi Marittime (Maritime Alps), clear tribute to those places on the border between Italy and France, already carry the deepest insights in terms of form and content that would have been developed in the years ahead.

Water, growing trees, living elements of the forest: through the involvement of the fluid materials of nature in the sculptural process, the action of the artist and the action of nature melt in a total identification, as "a sum of forces - as Penone wrote - from which the work arises over time".

I feel the forest breathing
I hear the slow, inexorable growth of the wood,
I match my breathing to that of the green world around me,
I feel the flow of the tree around my hand placed against the trunk.

The altered sense of time makes what is solid, liquid, and what is liquid, solid.
The hand sinks into the tree trunk which, owing to its rapid growth and the plasticity of its matter is the ideal liquid element for shaping.

Time understood as the subjective dimension of things,
the use and analysis of time in the relationship between man and the other elements,
the energy that is expressed and measured through time,
the use of energy as expression and language… 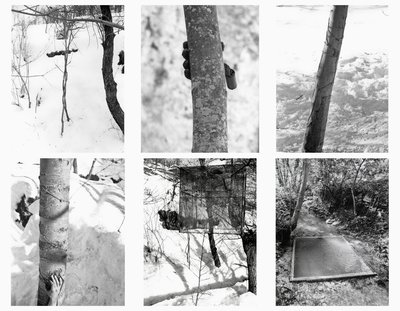 In that period Penone is in Turin to accomplish his studies. This is the time in which the city of FIAT expresses its strongest industrial identity and in which, not surprisingly, the student movement and workers’ protests begin. He is enrolled at the Academy of Fine Arts but he collects stimuli mainly from the art galleries environment and develops a rejection of traditional artistic techniques and the places assigned to them, as a reaction to the political and social context. So he chooses to go back to work in a natural context, rejecting a relationship of domination over its elements. The scenery of the Maritime Alps is identified as his true place of training and inspiration, where it is possible to establish an artistic exchange with nature, and the creative subject is part of the environment. 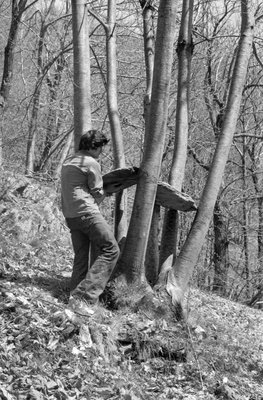 The toponym used as a general title for these actions (Maritime Alps) has a double meaning: both to recall the idea of an environment of mountain and sea which characterizes the places where these performances take place, and to evoke the concept of a permeable boundary through that the artist and the natural landscape interact in mutual, dynamic exchanges. In this context, Penone focuses on processes of juxtaposition of materials that cause lasting effects on the natural elements and immediate physical sensations, through which he seeks his own affirmation. The subtitles he assigns to each action are reflections that briefly describe the photographs he takes to document these experiments.

Alpi Marittime. Ho intrecciato tre alberi (Maritime Alps. I Braided Three Young Trees) explains the action of intertwining the stems of three young ash trees emerged from the ground next to each other. A botanical practice normally employed to strengthen the trunk or to create decorative effects, such as the interlacing of the three small trees, becomes in the artist’s creative imagination representation of "three words uttered at the same time by three people observing the centre of the triangle of which they form the angles", as recorded in the inscription of a drawing by Penone in the same years. 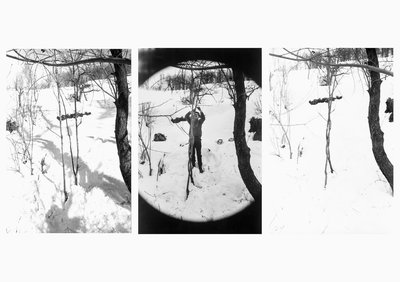 In Alpi Marittime. Continuerà a crescere tranne che in quel punto (Maritime Alps. It Will Continue to Grow except at That Point) the hand of the artist grasps the trunk of an ash tree, with a diameter slightly bigger than what his palm can hold. He subsequently replaces his physical presence with an iron wire hand molded to his own, and then with a metal cast. As a result, the trunk stops growing at that point, but the plant continues to grow around the cast, retaining the artist’s grip.

Similarly, in Alpi Marittime. L’albero ricorderà il contatto (Maritime Alps. The Tree Will Remember the Contact) the artist clings with his whole body to the trunk of an alder and traces the profile of his body with a zinc wire fixed with iron nails. The growing trunk incorporates the materials, forming a groove with raised edges, the tree's memory of this contact.

Metal wire and nails are also present in Alpi Marittime. I miei anni collegati da un filo di rame (Maritime Alps. My Years Linked by a Copper Wire), to mark the outline of Penone's hand resting on the trunk of an ash tree, wrapping it in a spiral line. "To its strength was added another strength: mine", Penone states. Along the copper wire the artist affixes plumb bobs, one for each year of his life. He declares that he would add one for every year of his life, and at his death he would want a lightning rod to be added, so that an electric discharge could melt all the plumbs together. The growing tree trunk incorporates nails, copper wire and plumb bobs, leaving a trace on the surface. 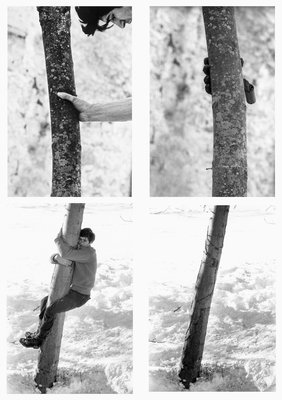 In Alpi Marittime. Crescendo innalzerà la rete (Maritime Alps. When Growing, It Will Raise the Net) the artist sets the top of a small tree inside a cube of wire mesh, with the lower face missing. On the upper face he places a cauliflower, a squash and two peppers, transformed into sculptures through a plaster and cement covering. The upward thrust of the growing tree lifts the cube, counteracted by the weight of the net and the objects. 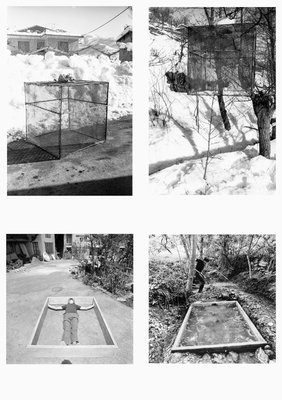 In Alpi Marittime. La mia altezza, la lunghezza delle mie braccia, il mio spessore in un ruscello (Maritime Alps. My Height, the Length of My Arms, My Girth in a Brook) is not a tree involved, but another natural element: the water of a stream in the forest, converted into a sculpture with the features of the artist. Penone creates plaster casts of his face, his hands, with open palms, and his feet. He forms a rectangular concrete frame, whose internal measurements correspond to his girth, his height and the length of his open arms. Before the cement of the walls hardened, he lies on the ground, stretching inside, and he pressed the casts where his head, hands and feet would have been if he had stayed in that position. Finally he immerses the frame in the stream, creating a sort of pool with his abandoned imprints, through which the water flows, taking on the constantly renewed sculptured form of his face, hands and feet. 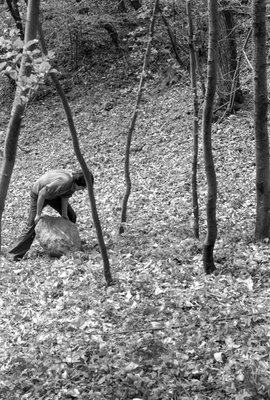