From the mid-1990s Giuseppe Penone undertakes a series of works that requires an intensive manual labour and where drawing acquires a new centrality. In addition to the sculptures entitled Anatomie (Anatomies), he creates the Propagazioni (Propagations), in which the encounter between the natural factor of growth and the cultural factor of work allows the materialization of the time period that endows them with substance. 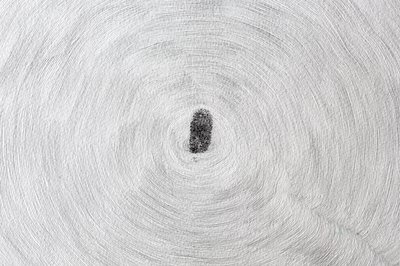 In previous works Penone revealed imprints of various body parts, which he drew or fossilized. The starting point for the Propagazioni drawings is the imprint of a fingertip, covered with typographic ink, embossed at the center of a sheet of paper. It’s the imprint of a particularly sensitive portion of skin, with which we gain tactile experience. But the fingerprint is also a unique and original fact, different in each individual, an element that allows identification.
The act of drawing sets in motion the propagation of the imprint of his fingers. Using India ink, Penone connects the lines of his fingertips with a concentric layout of circular shape that gradually grows larger. The concentric lines of the fingertip skin are compared to the concentric circles that mark the tree’s years of growth in the trunk. This idea is already detectable in sketches made in the context of the Maritime Alps series. 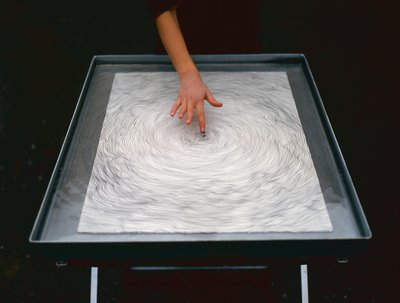 Each Propagation took a long time to be fulfilled. For Penone, time plays the same role as any other material for a work’s accomplishment. The artist declares that he wants to "concentrate time in one space": the time of the tree’s growth in Maritime Alps, the time required to strip a beam to take it back in years in order to restore the material to its natural form, the time the river has taken to shape a stone, the time vegetation takes to fill the void of the Gesti vegetali (Vegetal Gestures), the innumerable days spent retracing the wrinkles in his own skin, enlarged on the wall. 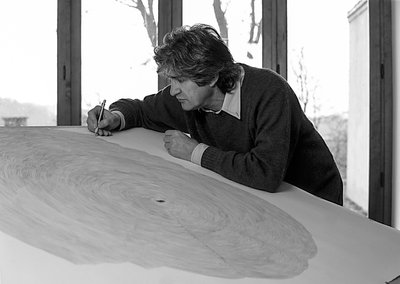 In a group of ten large works on paper backed with canvas - L’impronta del disegno (The Imprint of Drawing) -, created over a one-year span between 2002 and 2003, the distance between one line and another is always one millimeter. Penone carried out this demanding project, almost an exercise in meditation, in his studio of San Raffaele Cimena, Turin. Each of these works, "in which the action of drawing is the subject", took more than two hundred hours. The artist defines the result "a drawing that is not expended in the effect of its technique", but which suggests "a reflection on the world and offers an unexpected vision of reality". 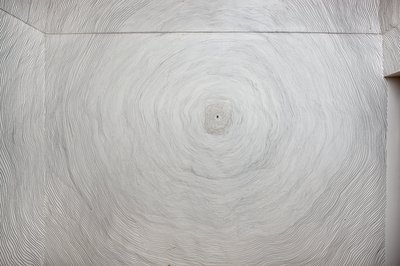 From 1997 the same drawings become the generating motif from which large wall works are created: placing the drawing at the center of the wall, at approximately the eye level, lines of India ink propagate the artist’s finger-prints, gradually increasing the distance between one line and another. 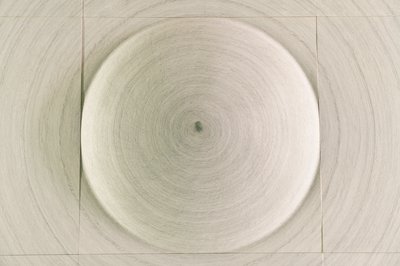 In a solo show at Durand-Dessert gallery in Paris, in 1998, the drawn imprint spreads to the margins of a sheet of paper. The paper, protected by two sheets of Plexiglas, is immersed in a zinc basin filled with water. If a finger grazes the surface of the water, a proliferation of concentric lines is generated, corresponding to the lines Penone has made in the drawing, which we can imagine as the negative of our fingerprint.

An impressive development of this work can be seen in Disegno d’acqua (Water Drawing, 2007), a site-specific work created for the gardens of the Reggia di Venaria in 2003-2007. In this case Penone draws a fingerprint in the water, rippling the surface of a basin thanks to a temporized emission of air, that with the cadence of a breath, allows the drawing to emerge and then gradually disappear.

With Ombra di terra (Earth Shadow, 2000) Penone develops the concentric lines that the imprint of one finger has impressed on a small piece of clay, in layers of the same material, which propagate in space in the form of a cone.
The cone is the geometric form in which light propagates in space; it is also the geometric form to which the shadow of a body tends, deflecting the path of light.
The contact creates a shadow and generates a drawing; the drawing propagates in space and becomes a sculpture. 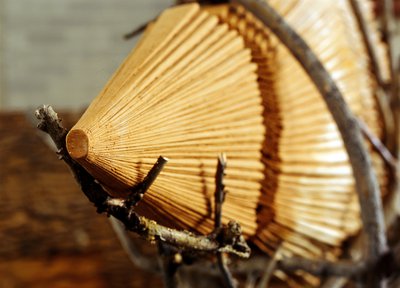 A light, low movement, the gesture of indicating a precise point in space.

Gesture that involves the power of men, over the spirit, things, tools.

Touching activates the magic of technology, from the thread of the weave to the language of the computer.

Propagation in space of the fingerprint as drawing and as sculpture.

Superimposition, sum of an infinite number of prints of the same finger.

Calculating the weight of the imprints of a life.

An infinite number of gestures, the continuous swarming of fingers.

The infinite number of fingerprints on the brow of Indians.

The common origin of all the Propagazioni works can be found in a series of ink drawings from 1969, in which the fingerprints propagate upward until the ink on the fingertip is used up. Penone notes numerous suggestions on these drawings, which all imply a strong association between the fingerprint and the growth rings of the tree: La foresta imprime le impronte del crescere (The Forest Engraves the Imprints of Growth, 1969), I cerchi delle impronte o gli anelli di crescita proiettati nello spazio costruiscono la foresta (Circles of Imprints or Growth Rings Projected in Space Construct the Forest, 1969), Il bosco delle dita (Forest of Fingers, 1980), Toccare gli anelli di crescita del bosco (Touching the Growth Rings of the Forest, 1980). The names of trees are assigned to the imprints and to their rubbings: beech, alder, ash, birch, cherry, mulberry, cedar, elm, linden, boxwood, fig, medlar, sessile oak, pomegranate… 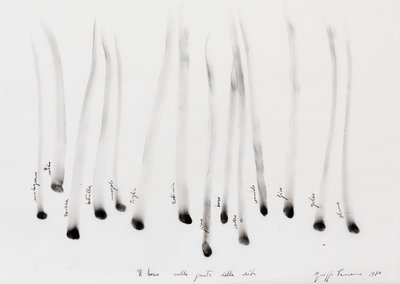 Linked to these reflections, Trappole di luce (Light Traps, 1994-1995) are branches or young trunks from different trees made of crystal, created at the Centre International du Verres et Arts Plastiques, in Marseille, by using the lost-wax casting process. Penone photographs them in the woods, inserted amid the plants from which he had made the molds: oak, hazel, cherry, chestnut, or birch. Tips of luminous and transparent crystal supported by a cone of shadow of opaque material make up Sulla punta delle dita (On the Fingertips), exhibited at the Musée d’Art Contemporain in Nîmes, France, in 1997. In one of these two sculptures, the five fingers are branches of bronze, while in the other the branches are evoked by the imprint impressed on a pyramid of clay, also marked by a myriad of small imprints left by the artist who worked on it. The works are based on the principle that silicon, the main component of glass and crystal, is able to capture and propagate light, and is the basis of inorganic chemistry, just as carbon is the basis of organic chemistry.

For Penone, "the propagation of a branch in space in search of light has the same structure as a glance" and "the tree is an enormous eye made up of many smaller eyes. Each of its leaves is an eye that catches as much light as possible (…) in every eye there is an overturned tree". The Light Traps created in 1995 are the result of a photographic enlargement of one of the artist's children's eyes, placed horizontally, with a fragment of a hornbeam trunk, cast in crystal, rising from the pupil. The light captured by the crystal converges on the pupil. A further variant of Light Trap, exhibited in Santiago de Compostela, Spain, in 1999, presents itself as a cherry or hazel branch, cast in crystal, leaning against a piece of felt hung on the wall, which, in turn, is an enlargement of a fingerprint that has left a charcoal trace on the skin.

In Propagazione dello sguardo (Propagation of the Gaze, 1997), the crystal trunk of a cherry tree rests on the foliage of several potted plants placed in a row. The crystal is placed at the viewer’s eye level and materializes the trajectory of light that reveals it. In other Propagations, created between 1995 and 1997, Penone uses paraffine, malleable material, both opaque and transparent, solid and liquid.
A tree trunk cast in crystal is laid down on paraffin slabs, that has a carved surface, filled with water.

In the work Albero delle vertebre (Vertebrae Tree, 1996) Penone associated the growth of the tree with the physical and mental growth of a human being. Around the lower portion of a skull resting on the ground, he arranged progressively enlarged casts of the skull, above which a crystal tree rises like a spine.

Sguardo vegetale (Vegetal Gaze, 1995) expresses in other ways the same search for light. It is a ceramic plate with the photo of a detail of Penone’s face, in conjunction with a tree from the forest whose branches pass through his eyes, so that his glance takes on plant form, extending into space as leaves towards sunlight. 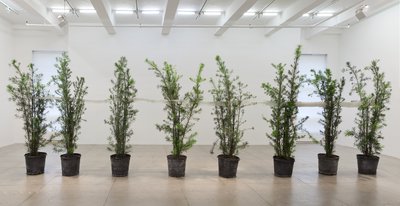