Rovesciare i propri occhi (Reversing One’s Eyes) is the title of a series of early pieces in which the artist reveals something that actually exists, but the viewer is not able to fully perceive voluntarily. Penone deals here with a different theme from the one developed in parallel in his Trees, pursuing as his primary objectives the redefinition of the practice of sculpture and reflection on the identity of the artist.

The installations created in 1969 at the Galleria Sperone in Turin in 1969 point in this direction, consisting in three works conceived in close relation to the architectural space: a cement tile resting on the cement floor of the gallery (Indicazione del pavimento/Indication of the Floor), a bar of bricks that protruded from the wall (Indicazione del muro/Indication of the Wall) and a rectangular glass tube, open at both ends (Barra d'aria/Beam of Air), which traversed the glass of a window at eye level to connect the inside and the outside, so that air could flow. Each of these installations consists of the same material of the architectural element that they occupied: cement, bricks, glass. The brick bar distanced the viewer from the wall, the cement tile raised up the floor, the glass bar highlighted the osmosis function of the window. The extensions made by Penone expanded the viewer's experience of the space through greater awareness. 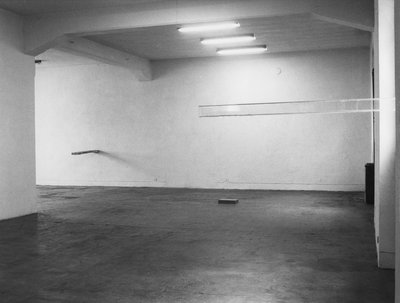 For the Galleria Toselli in Milan in April 1970 and in Tokyo Biennale one month later, Penone invented mirrored-surface devices that through perceptive games suggested a sort of disintegration of the space in which they were set up. In the Japanese show, little mirrors are reflected in one another, defining a circular route that also incorporates a mirror of water in which the sky is reflected. The work’s title, Demagnetizzazione di una stanza (Demagnetization of a Room), refers to the loss of gravity in the room, which, reflected in the mirror, transmigrates into the space.

Rovesciare i propri occhi can be considered a synthesis of these previous researches. Penone wears mirror contact lenses that make him blind and has himself photographed. The artist deprived of his gaze reflects in his eyes the landscape that lies before him, which viewers glimpse in the mirrored lenses. The photographic recordings give Penone the possibility of seeing, in the future, images collected in the past. 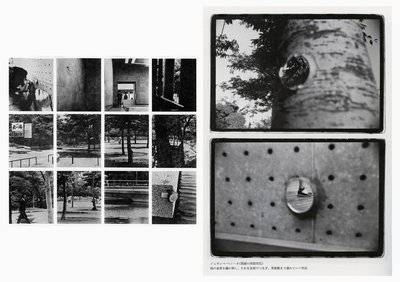 Mirrored contact lenses cover the iris and the pupil,
wearing them makes me blind.

. . . placed on the eye, they indicate a point of division,
of separation from what surrounds me.

Like the skin they are a boundary element,
the interruption of a channel of information that uses light as a medium.

Their mirroring quality causes the information that reaches my eyes to be reflected.

Blocking the extension of sight eliminating data necessary for my subsequent behaviour.

When the eyes, covered by mirrored contact lenses, reflect into space the images that they collect with the habitual motions of observing,
the ability to see is extended in time and the possibility of seeing in the future images collected by the eyes in the past is entrusted to the uncertain outcome of photographic recording.

Eyesight is interrupted, and Penone’s body becomes a closed volume, a sculpture. He is self-blinded but has the capability to record images that are not, in this special case, the result of individual selection. Through what has been called "divinatory art" of the contact lenses, the body of the artist is offered up "to the collective imagination" through his visionary capacities. The images that his eyes record are immediately projected outward, directed at others without being manipulated.

The artist, however, has the power over time, by governing the phases of the work: putting on the mirrored contact lenses, turning his head as if he were looking out at the landscape, reflecting the landscape in the lenses, having himself photographed, having the photos printed, and looking at them afterward. He performs a strategy that allows to return the truth of his vision, to convey an authentic experience that is not influenced by habits or by the context, thus an experience that is not manipulated nor individual. On the contrary, it is founded on some shared references, such as the idea of sculpture itself, to the idea of blindness, layered by myth, and finally the function of documentation, attributed to the photograph. 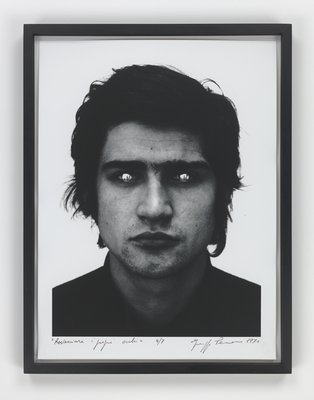 On September 19, 1970, Penone wore the lenses in Sperone’s gallery, during a Hamish Fulton exhibition; he did so again on October 6, 1970, along the banks of the Po. On February 23, 1971, he performed in Piazza di Spagna in Rome, in the company of Gilberto Zorio and Cy Twombly, and, a few days later, on February 28, on the train from Ceva to Savona. He wore the lenses again on March 23 at the Galerie Paul Maenz in Cologne, and on May 26 at the Kunstverein in Munich, at the opening of a group show in which he participated, Arte Povera: 13 italienische Künstler.

On several occasions the photographs by Paolo Mussat Sartor or Paolo Pellion document the work. On March 9, 1971, Penone wore the lenses on Via Lepetit in Garessio, where Claudio Basso took slides of the action. A selection of them was mounted on a single carousel and projected in succession according to a specific sequence. In subsequent shots the position of his figure remains unchanged, but the framing gradually zooms in and it ends with the detail of his eyes, blinded by the lenses and reflecting the figure of the photographer. On December 1, 1971, at a survey show titled Informazioni sulla presenza italiana at Incontri Internazionali d’Arte in Rome, he was photographed by Claudio Abate.

The eye absorbs light; it does not reflect it.

The reflected image is the border between reality and a dream world or apparition;
it has no substance and is the instant which follows the changes in reality.

The reflected image is absorbed by the eyes, and dies in them.

The wrapping is important as it is the definition of the individual.

Wounded skin interrupts the perfect definition of a person and permits a confusion with different elements and substances which little by little can overwhelm and blot out the identity.

It is a confusion similar to sounds which passes through things.

The skin becomes a drum, a poetic and musical instrument. 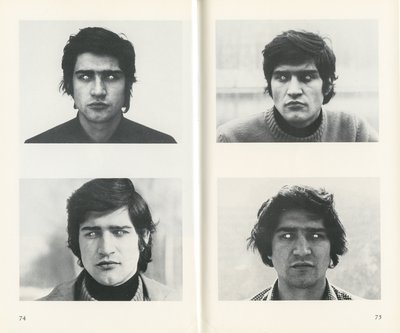 Rovesciare i propri occhi is also the title of the book published in 1977 in the prestigious Giulio Einaudi Letteratura series that contains a chronological account of Penone’s work with images and brief texts by the author. 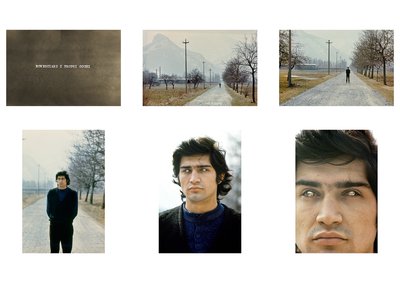