To Be a River

In the series Essere fiume (To Be a River), the act of sculpting does not consists in revealing a hidden aspect of nature, but in retracing the stages of natural processes and in repeating them by means of traditional sculptural techniques and materials. The first work of this kind is exhibited in a homonym solo show at Konrad Fischer’s gallery in Düsseldorf, in 1981. 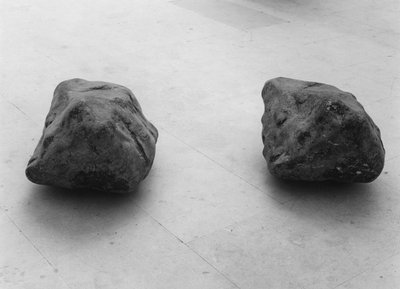 Art in the early 1980s marks a renewed interest in painting and sculpture. Giuseppe Penone also employs traditional carving techniques, but his artwork can easily be mistaken for a natural element, marking the possibility of understanding sculpture in paradoxical terms.

Again the premises can be found in the early works. In the Maritime Alps series the interest in the river as a natural element is evident in a work such as La mia altezza, la lunghezza delle mie braccia, il mio spessore in un ruscello (My Height, the Length of My Arms, My Girth in a Brook, 1968), but also in a number of drawings realized at that period depicting stones of a river bed. 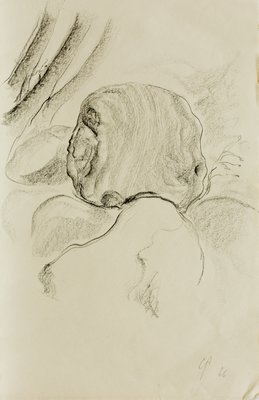 The idea of remaking something that already exists into sculpture is present in Gemelli (Twins, 1969), which consists of two rectangular blocks of identical size, one in iron, one in wax: all the accidental occurrences that alter the appearance of the wax form over time are reproduced on the iron block by the artist.

The exploration of the carving process is completed by Penone as early as Nero assoluto d’Africa (Absolute Black of Africa, 1978-79) comes out. The artist realizes that caressing the stone with sandpaper or other stones or working it with a chisel, rasp or scalpel is a process similar to what happens with the flow of water from a river smoothing the stones. Through the manual work on the matter, the artist can identify himself with the river. 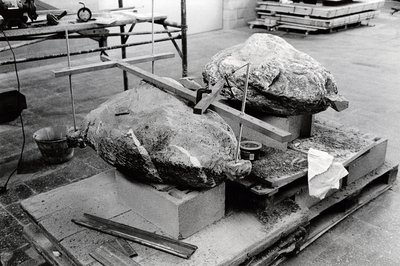 To know every stone, each ravine, each small bed of sand of a stream,
to revisit it each year probing its bed to record the changes produced by rains, by frost.

No element, none of its forms are accidental.

Hands turning white from staying in the water to be, at least once, part of the river.

The creative process necessary "to be a river" is described by the artist himself in 1980: "To extract a stone sculpted by the river, to travel upstream and discover the exact point from which the stone came and extract another piece of rock from the mountain and duplicate exactly the stone taken from the river is to be the river". He detaches a mass of stone from the mountain and works it, making it identical to the stone taken from the river, whose specific form was the result of its exposure to running water and a series of different natural accidents: rolling about, collision with other stones, and the corrosive action of the earth dragged along by the water. In the end "producing a stone of stone is perfect sculpture, it reenters nature and is cosmic heritage, a pure creation; the naturalness of the good sculpture imparts a cosmic value to it. It is being a river that is the true sculpture of stone". 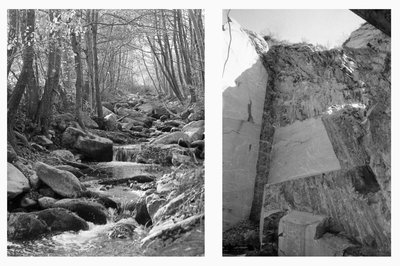 For the first exhibition, the stones, the natural one and the one recreated by the artist, are exhibited in two different rooms and by means of a support built by the artist himself to recall the fluidity of the river element. The following year, instead, for the edition of Documenta 7 in Kassel, in 1982, the stones are gathered side by side, to make a feeling of wonder rise in the viewer, facing two perfectly identical natural elements. Over the decades that followed, Penone creates new variations of Essere fiume, each one different in form and dimensions, but the material is always stone.

The water of the falls, the torrents, the rivers
like stones excavate the land and produce the river bed
like feet repeating a journey following an economy of action
and a logic of consumption produce the path, the road.

Different materials have the form of analogous movement.

The bends in rivers are the result of the mass and the velocity of the waters
that run down the slope of the territory like the bends or curves of the road. 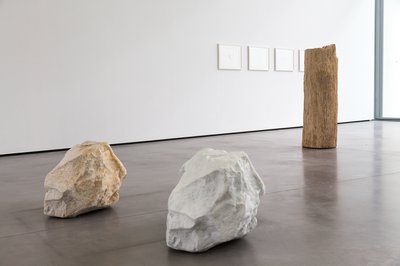 The logic behind Essere fiume can intersect several disciplines. Action whereby water shapes a river stone over time seems completely similar to an action carried out by a community of individuals, generally the subjects of anthropological analysis, as in the work conceived for Dean Clough Mills Foundation. Before becoming a cultural centre, Dean Clough Mills was a large carpet factory of the early nineteenth century in Halifax, closed in 1982. The work Contour Lines (1989) reveals "the traces of one hundred and fifty years of labor", the presence of his five thousand workers wearing clogs, who consumed the floors and stairs of the factory. Penone creates casts of the floors eroded by time and makes them positive, transforming the empty space of the material excavated with the use, into a solid. Finally, he casts these shapes into cast iron, the metal alloy widely produced in Yorkshire, using a foundry not far from Halifax. The automatic and involuntary action carried out by the workers over the years is similar to the slow action of the river. The repetition of that process ensures the transmission of memory, of awareness. 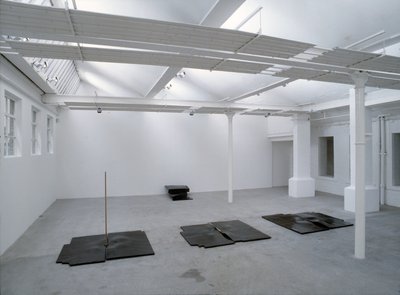 Reflections on the stratification processes of both matter and memory are present in other works. For example, in the series La struttura del tempo (The Structure of Time, begun in 1992) the starting point of each work is a branch which has detached itself from the tree and is therefore at the end of its growth. The artist makes an approximate copy in clay of the same shape and size. Others are superimposed on it, becoming smaller and smaller. Penone proposes, in a slow backwards path, the shapes and dimensions that the branch has assumed over time, returning to its initial configurations. The vaguely pyramidal structures that result - even in the bronze versions - are the materialization of the passage of time, visualized through the gradual growth of the branch. 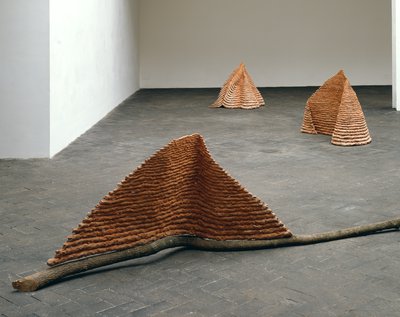 Even in Il riflesso del bronzo (The Reflection of the Bronze, 2004), a sequence of six bronze plates, each created from the cast of the preceding one, the artist reflects on the idea of stratification of time in the matter. The initial plate is shiny and completely reflective thanks to a polishing action carried out by stroking the surface. Penone, covering the reflective surface with heat-resistant plaster, makes a cast from it. He uses this one to create the mold for casting a second plate, using the lost-wax technique, and repeats the action five times. In each new plate the usual adjustments (filing down, welding, additions) are omitted. Thus from plate to plate the dimensions are gradually reduced (the so-called withdrawal of the bronze), but the surface becomes thicker, populated by traces and dribbles, and bent. Every plate assumes the memory of those that preceded it. Moreover, the process of repetition enacted in this work translates light into its shadow, namely into the opacity of the material, indicating the reversibility of opposites. 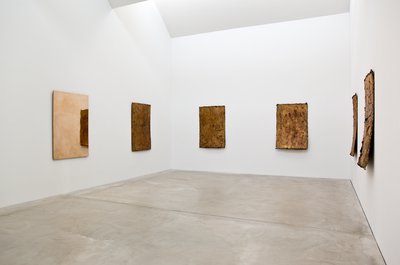 Il riflesso del bronzo (The Reflection of the Bronze), 2004

In Geologie (Geologies) and Terre (Earth), two series of works conceived between 1987 e 1991, Penone repeated the slow action of nature. Pouring the earth a little at a time with one hand, he stratifies it inside transparent structures, supported by aluminium or stone frames. In some of these works the imprint of a hand is visible, thanks to the earth's ability to preserve the traces of the objects that occupied it. Penone inserts a hand into the container and then pours layer upon layer of earth before removing it. When his hand is removed, the layering of the earth loses its linear design, taking on the shape of the hand. It is both a physical and anthropological process. 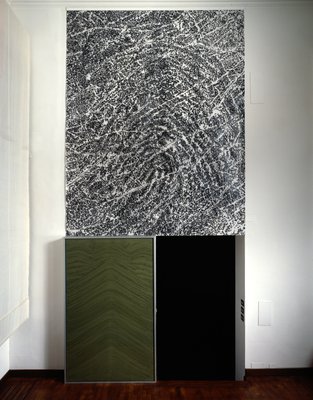 These works permit superimposition and juxtapositions. A group of photographs from the series Svolgere la propria pelle (To Unroll One’s Skin) are put together and shown alongside Geologie, and form Senza titolo (Untitled) in a solo show at the Galleria Christian Stein in Turin in 1989. In Geologia (Geology, 1989) a stratified portion of earth contained inside a long, narrow Plexiglas cylinder is juxtaposed to a drawing of the enlargement of an imprint of the artist’s skin.